Krishnadas Kaviraj Goswami has described how Sri Bijali Khan met the Lord and received His mercy in the eighteenth chapter of the Madhya-lila.

Lord Caitanya made all animals to chant and dance in the Jarikhanda forest.

That year, Mahaprabhu took the Jharikhanda route to Vrindavan after the Rathayatra festival.

Support this Service that enlightens you & Be dear to Krishna. Prepare, Analyze & Match horoscopes; Release Matrimonial & Other ads; Donate; Get Private Counselling; Save upto 80% in Amazon! Click & Get links of all Services!

Ramananda Raya and Svarupa Damodar Goswami arranged for two people to accompany him, Balabhadra Bhattacharya and another Brahmin servant.

As he travelled, his absorption in ecstatic love increased a hundredfold over that which he experienced in Puri.

As he was wandering through the twelve forests, the Lord came to the place known as Akrura Ghat on the Yamuna.

The Lord jumped into the water and remained immersed for a long time.

Krishna Das, a Rajaputa who had been attracted by the Lord and was accompanying Him, became afraid that the Lord had drowned and started to cry out for help.

Balabhadra Bhattacharya heard his shouts and quickly dove into the water to pull the him out.

Balabhadra was anxious about the Lord’s great distraction due to his divine ecstasies and so he discussed with Madhavendra Puri’s disciple, the Sanoriya Brahmin, about what could be done to protect him.

After some discussion, they decided that the best thing to do was to propose to Mahaprabhu that he go to Soro-kshetra on the banks of the Ganges for the full-moon bath at the end of the month of Magh, known also as Makara-sankranti.

From there, they could take him on to Prayag.

The Rajaputa Krishna Das and the Mathura Brahmin were well acquainted with the route along the Ganges and so they remained with the Lord and the two Brahmins as guides.

As they tired from walking, the Lord sat down underneath a tree. Nearby, a herd of cows was grazing which reminded the Lord of Krishna’s Vrindavan lila.

Suddenly, the cowherd began to play his flute causing Mahaprabhu to faint in ecstasy. He fell to the ground, his breathing stopped and foam accumulated around his mouth.

At this very moment, the Muslim soldier, Bijali Khan was passing by with a troop of ten cavalrymen. His immediate suspicion on seeing the Lord’s condition was that the four men accompanying him had poisoned him with datura in order to steal his money.

The Pathan immediately bound the Lord’s four companions, intending to kill them, causing the two Bengali Brahmins to tremble in fear. The two others, however, were fearless and quickly thought of a way out of the situation.

Read this story also:  THE POWER OF PRAYER – STORY

The Sanoriya Brahmin explained to the Pathan as follows: “I am a Brahmin from Mathura and I know hundreds of people in the Emperor’s court. This sannyasi is my Guru and he happens to be ill, which makes him faint from time to time. Tie us up and wait for a few minutes. He will regain consciousness and you will hear the truth from Him.”

The Pathan listened and said, “I can understand what you two are saying. You are from Mathura, but these two Bengalis are trembling with guilt. They must have done something wrong.”

The Rajaputa Krishna Das was acutely aware of the danger of the situation and said, “I live in the neighboring village. I have two hundred Turkish mercenaries  with a hundred cannons at my command. I only have to shout and they will come here and take your horses and equipment. I think that you must be highwaymen, not these two Bengalis. You are only interested in robbing pilgrims like us.”

The Muslim cavalrymen were cast into doubt by these fearless words.

Meanwhile, the Lord came back to consciousness and in a transport of ecstasy, shouted out the names “Hari! Hari!” and began to dance.

The Pathan soldiers were overcome by fear when they heard the Lord bellow and saw his ecstatic dancing.

They immediately liberated their four prisoners and the Lord never saw his Devotees tied up. They were attracted by the Lord’s physical beauty and by his spiritual mood and they asked him the question which had been troubling them: were these four people robbers who had drugged Him in order to steal His possessions?

The Lord answered, “I am a sannyasi and I live by begging. I have no wealth. These four men are my followers. I sometimes suffer from epilepsy and fall unconscious as a result. These four companions mercifully stay with me when this happens to protect me and take care of me.”

In the group of cavalrymen, one Muslim dressed all in black introduced himself as a Sufi practitioner. He was pleased by the Lord’s appearance and wished to discuss scriptures with him.

He established that the Supreme Truth was impersonal on the basis of the Islamic scriptures. The Lord, however, displayed his own knowledge of the Qur’an and demonstrated the invalidity of the Sufi’s arguments, establishing the personal nature of the Supreme Truth and the Supreme Lord’s transcendental qualities. Then the Lord went on to show that the philosophies of karma, jïana and yoga did not hold the answers to the supreme goal of life, which is nothing other than pure love of God.

All the Pathans were enchanted by the Lord’s physical appearance and were even more attracted when they heard him speak on spiritual life and its goal. The Sufi Pathan began spontaneously to chant the names of Krishna.

When Mahaprabhu hear the saintly Muslim chant the Lord’s names, he was pleased, thinking that all the sins that he had accumulated over millions of births had all been destroyed and that he had been purified.

The Lord told them all to chant, which they did. He initiated the Sufi Pathan in the Holy Name and gave him the name Rama Das. When the prince Bijali Khan saw the good fortune of his own servant, he fell down at the Lord’s feet and repeated the name, “Krishna, Krishna.”

The Lord also blessed him.

“After bestowing his mercy upon them in this way, Mahaprabhu continued on his way. All the Muslim soldiers then became mendicants and were celebrated as the Pathan Vaishnavas. They toured all over the country, glorifying Mahaprabhu’s activities.

Bijali Khan became a greatly advanced Devotee, and his fame was sung at every holy place of pilgrimage.”

RAJAN from Tamil Nadu, India, a Life Patron and an Initiated Devotee being in ISKCON for nearly three decades, serves anonymously to avoid Prominence and crowd as an insignificant, Humble and Neutral Servant for all the devotees of Krishna! He promotes Social media forums and this blog-website as e-satsangha (e-forums) blessed with Lakhs of followers, to give Spiritual Solutions for all the Material Problems of the devotees since 2011! He writes friendly and practical tips to practice devotion (i) without hurting the followers of other paths, (ii) without affecting the personal and career life, and (iii) without the blind, superstitious and ritualistic approach! He dedicates all the glories and credits to his Guru and Krishna. View all posts by RAJAN

This site uses Akismet to reduce spam. Learn how your comment data is processed.

SEARCH A TOPIC IN THIS SITE 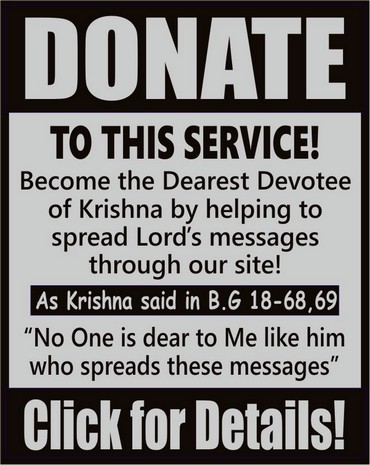 VISITORS TO THIS SITE